Step Away From the Painting

You may have seen this before, but it illustrates an important point.

Look at this picture.  Can you recognize the face? 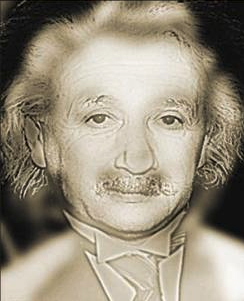 Original image here.
Now, turn around, walk about 15 feet away from the screen and look again.  Who do you see now?  (By the way, if you squint you don't have to get quite that far away.)
What's going on?
What's going on is that our initial interpretation of the picture is based on the little details - the lines and small shapes.  As we back away, these little details get swallowed up in the broader masses and we see a different picture all together.
Imagine this picture as a large commissioned portrait painting.  The unveiling would have been hilarious.  Those at the front, Einstein and friends, would have seen an artsy yet recognizable portrait.  Those in the audience would see Einstein gladly admiring his likeness. . . which would be confusing since it would look like Marilyn Monroe to them.  Einstein would then be confused at their laughter, which would do nothing to restrain their mirth, and the entire unveiling would later be hailed a Dadaist masterpiece.
If you are a painter you might want to avoid this unfortunate scenario in your own unveilings, and if you do, you simply need to take a few steps back from your painting every now and then so that you make sure your details and masses are harmonious.  Squinting can help too.
It is said that "Those who watched Sargent painting in his studio were reminded of his habit of stepping backwards after almost every stroke of the brush on the canvas, and the tracks of his paces so worn on the carpet that it suggested a sheep-run through the heather." - from the notes of Miss Heyneman, who studied with Sargent.
Posted by JLFA at 9:15 AM