After 1) having several photo shoots (I'll do a post on this later), I 2) sifted through the hundreds of photos and compiled my favorites to compose this scene (I believe the final composite is made up of about 20 different photographs).  Then I 3) stretched a canvas (I used Artfix's Belgian Linen Canvas L43U) and 4) toned it with Raw Sienna. While it dried, I 5) drew a drawing to scale and then transferred it to the dry canvas.  Then it was time to 6) print the Photoshop image full-size, going through several iterations to get the right colors, and finally 7) the actual painting began. . . and to exuberantly prove the point, I took a photo! 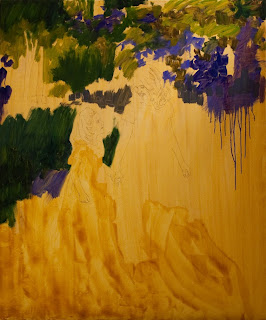 STEP 1 - Initial Colors
About only a few hours I had covered much of the canvas - (I always feel so productive at the beginning of a painting!) 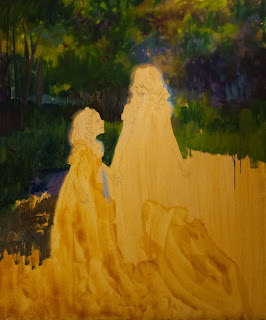 STEP 2 - More Color, Soft Edges
The paint was kept quite thin, because I wanted the initial golden tone to poke through the layers and provide a unifying overall warmth to the painting.  The other thing to be aware of is that I kept a soft edge around the subjects, so that it would be easier to blend them into the background.  It's a lot easier to make a hard edge out of a soft one than to go the other way around.