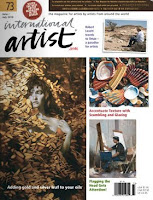 INSPIRATION
My brother-in-law invited me to join him on a kayak ride on a local river (I brought my camera, he brought the paddle).  Our breath was visible as we slid the kayak into the river that cold autumn morning.  The purple morning sky started glowing a brilliant fuchsia and since the water was slightly warmer than the air, pillars of mist to rose out of the river and drifted along the surface – almost like a second river.  The sky continued to warm, brighten and change colors, until eventually, as we turned out toward the middle of the river, the blazing sun exploded above the tops of the trees.  The low trajectory of the sun’s rays got caught in the mist and for a few minutes the air was vaprous gold all around us, but then, too soon, it was over.  Michaelangelo said, “The true work of art is but a shadow of the divine perfection.”  This painting is an attempt to echo the beauty of that morning.
DESIGN STRATEGY
I cropped the scene close to the horizon line since this is where the action is.
I suppose this scene could be painted on a large scale, but I chose to employ a small format to give the viewer a sense of the intimacy that one often feels when experiencing such sublime moments in nature.
While parts of the painting are blended and smooth, the texture of small brush strokes in other areas characterizes the continual movement of the water, the grasses, the branches, and the air.  The interplay of overlapping light and dark forms gives the illusion of depth.  The dark shapes also serve to highlight the golden hues.  If the grassy patch of land were missing from the painting, there wouldn’t be enough contrast in the scene to make it interesting.
WORKING PROCESS
This painting is painted on linen mounted on Dibond.  For brushes, I used filberts, flats, and fans as well as Langnickle’s 5590 Series - a really odd kind of brush that makes unique incidental marks. I color-corrected my source photos in Photoshop’s Camera Raw as soon as I got back to my studio.  The value range in the scene is critical, and I had to get it right. If the sun were too bright, it would look fake, but if it were too dark, the painting would lose any power.  Achieving the correct tonalities required painting several layers – letting the painting dry between layers.  To complete the painting, and add glow to it, I glazed parts of the painting with Indian Yellow. Since I didn’t want the sky to yellow any further as it dried, I used Weber’s Permalba White, which is made with safflower oil.
Posted by JLFA at 4:04 AM