For Painters: Don't Get Used to Errors

Look at this picture - Maybe something's a little off with the face on the right - but hey - you can still tell it's Margaret. 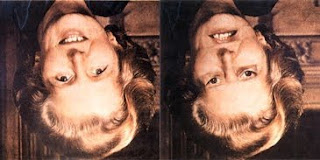 Now scroll down to see the same photos right side up.

When seen right side up, the differences between the right and left portraits are now apparent. . . freakishly apparent.

(I found these photos here.)

This illustration has application to painting.

First of all:  Don't paint your subject's smile and eyes upside down if their face is right side up, it will look super creepy.

And, secondly - Painting is often a process of refinement and if you get too used to something it will be hard to see the errors.

When I was in college I participated in a figure-painting class where we painted a full-length painting of a model for 3 hours twice a week for 8 weeks.  I had a pretty good start to the model's head, so I left it and worked out the rest of the body.  I had an idea where the hair was to go, but I left the hair out for several weeks.  I knew that the hair needed to go on the model's head, but seeing the painting for so many hours without it, I became used to that look.  I still remember the shock I felt at seeing the head change so dramatically with the addition of the hair.  The hair simply didn't look right - it changed the shape of her head and I was used to the old shape.  If the hair hadn't been a separate element (as in the placement of the eyes, or the angle of the jaw) I probably would have removed it, thinking that it just wasn't right.

Here are several steps for combatting this issue:

• Work from the general to the specific.  I should have painted more of the shape of the hair in the beginning stages of the painting, so that it's addition later on wasn't so jarring.

• Just like the photos above, alter the view a bit.  Turn the painting upside down or look at it's reflection in a mirror.  You could also look at the painting through a reducing lens (opposite of a magnifying glass).  These new views can show you errors and awkward areas of your painting that you had simply become used to.  Errors usually yell at us at first, but they'll eventually become hoarse and lose their voice as we become used to them.

• Step Back - This is the vantage point that most of those who see the painting will have.  Color, value, and spatial relationships should be painted with this fact in mind.

• Always be checking relationships - Facebook is good for this (Just Kidding).  Spatial, color, and value relationships to be specific.  This is how you refine your painting - let the parts unify the whole.

• Never "settle" - Figure out the problem and fix it.  Settling, when you know there is an error, is weak.  If you know something is not right, but you don't know what it is, I offer a few suggestions.  You could set the painting aside for an hour/day/week/month and come back to it with fresh eyes.  You could ask a trusted advisor for clues.  You could take a class or workshop and then return to the painting with new skills.  Whatever you do, just don't settle.

If you need any impetus to summon forth the effort to fix your errors, think of these Margaret Thatcher photos!  (But don't think about them too much - they're really pretty creepy - although entertainingly creepy!)
Posted by JLFA at 2:38 PM